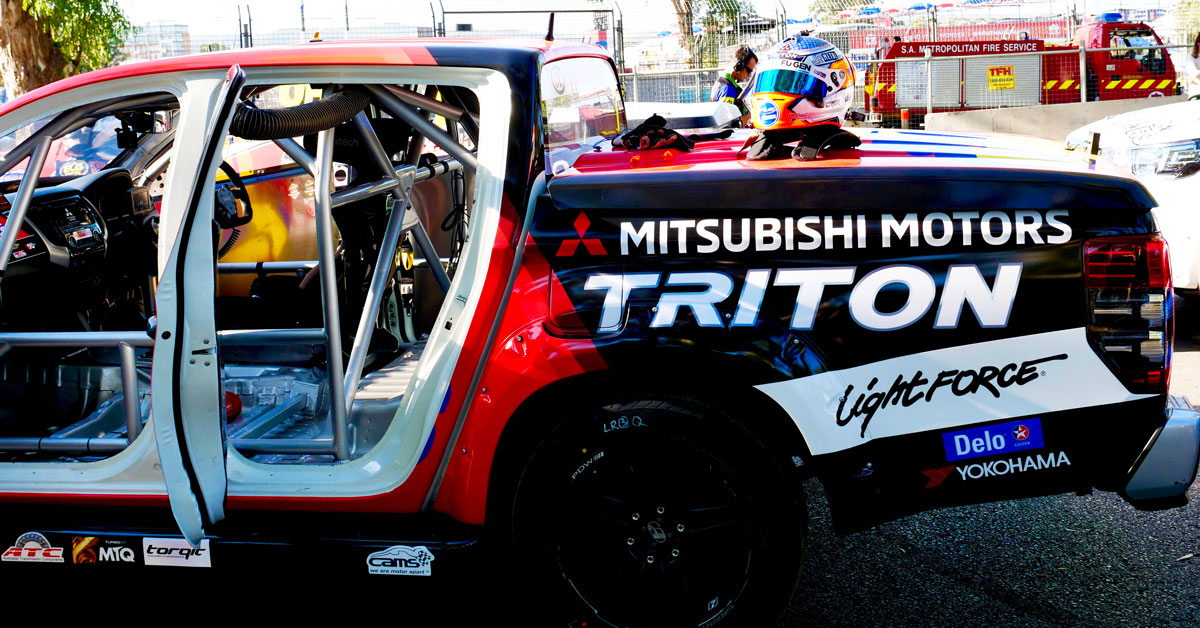 Lightforce is proud to be a key sponsor of Team Triton Racing as they debut in the all-new ECB SuperUtes Series at the Adelaide 500 from March 1-4, with Dakar champion Toby Price driving.

In 2018 the ECB SuperUtes Series will feature at eight of Australia’s key motorsport events starting in our home town of Adelaide and then at SuperCars Championship events in Winton, Townsville, Ipswich, Sandown, Bathurst, the Gold Coast and finally Newcastle.

Tarnia Conti, Chief Operations Officer at Lightforce said, “Lightforce has a strong association with both high-performance and grassroots motorsport. In 2017, Lightforce lights led the way on two entrants in the Score Baja 1000 in the USA, and we were the named sponsor of Lightforce Rally SA in 2016 and 2017.”

The Mitsubishi Triton is one of the most popular dual cab vehicles in Australia, and many are fitted with Lightforce lights and accessories, so it makes sense that Lightforce supports Team Triton Racing and has branding and lights featured on a Mitsubishi Triton.

Lightforce is a high-performance brand, so it goes without saying that we are extremely excited to learn that Toby Price will be driving the #87 Mitsubishi Motors Genuine Accessories SuperUte which features our branding and a Lightforce LED Light Bar. In 2016 Toby became the first Australian to win any category of the legendary Dakar Rally.
Total Tools are the major sponsor for the #50 Triton SuperUte, driven by Team Triton team manager Craig Dontas who has spent the last seven years racing in the V8 Ute series.

Lightforce is offering a chance to hang out with Team Triton Racing at the Adelaide 500 and Lightforce fans should keep an eye out for other promotions to win tickets and experiences at ECB SuperUtes Series events and other and special occasions throughout the year.

Both Lightforce and Mitsubishi Motors have been part of global motorsport for decades, and this latest chapter in our involvement will expose both brands to old and new generations of motorsport enthusiasts.